Transforming a Tragedy into a Legacy 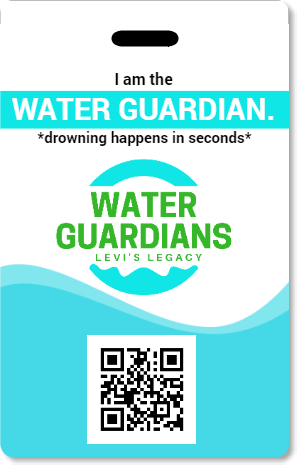 Exactly one month ago, on June 11 2018, tragedy befell Nicole Hughes’ family.   Her 3-year-old son, Levi, accidentally drowned in the pool of their beach house on the Gulf Shore while everyone, including a dozen adults and numerous children, were right there.  It took just a few seconds, and her wonderful son was lost forever.  But Nicole, while overcome with grief, immediately decided to take action, and to do something to prevent more accidental drownings, which she discovered constitute an amazingly high percentage of unintentional deaths of children in the U.S.

Nicole came up with the idea of a “Water Guardian” tag, which would be worn at all times by an adult, tagging them as responsible for watching out for the kids near the water.  It would be a visible, tangible reminder of the importance of staying vigilant at all times.  In one short month, despite all the other things she had to handle, she researched the problem, fleshed out the concept, developed great graphics, and set up the Levi’s Legacy website.  She immediately began actively reaching out via social media and informing parents of the grave danger their little ones face.  She has already been featured in numerous news reports and television broadcasts, getting the message out that she wishes she had received before it was too late.

She enlisted the support of the American Lifeguard Association, the leading source of training and resources supporting water safety.  Nicole is currently seeking a broad range of sponsors to help ensure that every young parent gets a clear message about how critical it is to remain alert at all times around water.  She wants everyone to know that drowning can happen in seconds.

Nicole has already raised thousands of dollars in donations, all of which is being used to raise awareness of this largely unrecognized threat.  She asked InstantCard if we would support her effort, and we’re pleased to say that in the last two weeks we’ve already printed and sent out nearly one thousand Water Guardian tags!  And this is just the start, judging by Nicole’s energy and commitment to this cause.

We encourage everyone to visit the Levi’s Legacy website to learn more, and to contribute to this very worthwhile cause.