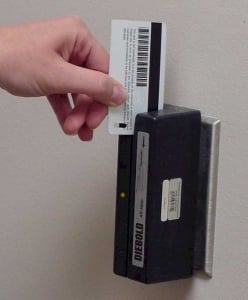 When adding an auto-ID capability to your ID cards, many people turn to the familiar magnetic stripe technology, just like that found on all debit and credit cards. Magstripe technology is easy to deploy and extremely reliable.

There are two different kinds of “magstripe” options available when you order cards:

HiCo cards are able to retain the encoded information more reliably, so for example they are less likely to get corrupted in the presence of an external magnetic field. LoCo cards are a little bit cheaper, but are more appropriate for short-duration uses such as transit passes or amusement park tickets.

We generally recommend HiCo as there is very little price difference, and for most applications it is better to have a more reliable read/write capability.